Ep 8. Life Makes Me Nervous; I Like Butthole Surfers (...and Stick Men With Ray Guns) 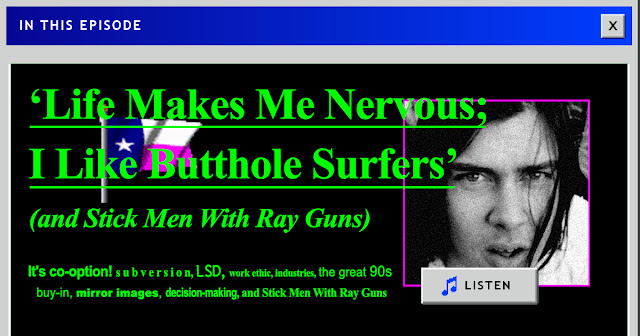 Episode 8 of Barely Human continues into the post-punk space discussed last week... but where the London post-punk response was community-minded and in the realm of 'unpop,' this week we look at the Texan response with anti-punks Butthole Surfers and Stick Men With Ray Guns. Everything is bigger in Texas, and it's a predictably wild ride that you can listen to via these links:

Now, some show notes, featuring, sources, further reading, playlists and more discussion that didn't make it to audio. First, here's a Spotify Playlist to follow the episode with, a slightly different approach for this week's playlist by using the two other bands I thought about using for this Ep before settling on the Butthole/Stick Men story: my all time fave's Flipper and the totally, totally bizarre Crucifucks. If you'd like to get in touch to chat more or give feedback, follow us via @barelyhumanpod on Twitter, Facebook or Instagram or email me at max@barelyhuman.info.

Some supporting info and omissions below...

Life Makes Me Nervous; I Like Butthole Surfers
ERRATUM: Note a major error in the episode intro...referring to the rise of Bill Clinton, Tony Blair, et al to office in the 1990s I said the words 'The New Left,' which was a conflation of Britain's New Labour and the 'third way' politics that Clinton and Blair pioneered in the West. The New Left was a form of progressive politics rising out of '60s activist frameworks, i.e. much of what was celebrated in Episode 1 so that's a particularly huge error and I'm sorry to you, myself and the books of history.
Yes, the title doesn't rhyme if it's not read in an Australian accent...we discovered this when the zine this episode was based on got sent to the Americas. Thus we have an American and a Brit reading out the title to demonstrate / irk.

This episode was tough to write purely because there are just so, so many Butthole Surfers stories out there. That kinda thing muddied the Black Randy episode, but unlike Randy, the Surfers somehow kept a career going for thirty years. A couple things that need extra explanation: we dropped cameo's of Gibby's Dad throughout the episode without explanation, the Texan children's TV host Mr. Peppermint ("and when they were down they were down.") We also skipped the fact that Butthole Surfers signed with Rough Trade for a giant sign-on fee months before Rough Trad US went bankrupt in the '90s...obviously a telling link between Ep 7 and this Episode, but who has the time??


I think the most disappointing cut for me personally (that was necessary for time) was a section that detailed the Surfers experience in Athens, Georgia... they moved there mid-career to be in a more central location for touring than Texas... or to stalk R.E.M who the band had a strange and comical obsession with. It was in Georgia where they'd play The Celebrity Club, a place where drag legend RuPaul frequented and befriended the band. It's this thread as well which shows the different response Butthole Surfers had to many of their underground peers: nixing the macho hardcore schtick for a performance art approach that drew in a diverse following.

The '90s MTV years with Beavis & Butthead appearances, soundtrack appearances, Teresa Nervosa's cameo in Slackers (teased at the end of the ep) and their ridiculous cover of 'Hurdy Gurdy Man' probably all warrant a whole episode - hope someone writes an entire series about '90s co-option which is completely fascinating to me. It's a key decade in the cultural breakdown I think we experience today, where it's honestly hard for people to tell who is of or against the industry establishment.

Nothing Rhymes With Orange; I Like Stick Men With Ray Guns
(That doesn't rhyme either). First of all a correction... the intro is a little misleading when I said that the Stick Men never released an album...there are of course a handful of records, but they were released well after Bobby died in the year 2000. They're made up of discarded studio recordings, live recordings, etc... there was a planned Butthole Surfers / Stick Men live LP in the '80s as well that apparently was discarded when the tech they hired to record the show didn't care enough about the Stick Men to set up the mic's properly. So it goes.

A little thing about the butt mic! Stick Men With Ray Guns had a lot of surrounding mythology that was exaggerated and maybe given extra weight when carried along the tour circuit; Stick Men were a mystery. The one show when Bobby stuck the mic in his arse seemed to get caught up in the Butthole Surfers repetitions, and they were known as the band who put the mic in the butt. Other stories like Bobby pissing on the bands they supported while they played, were again isolated incidents...but I think, like Black Randy and GG Allin before him, it was a vague and never ending antagonism that ended very very poorly for him and the people around him.

There are other details to the incident about Bobby and Candy that were left unsaid to truncate that section for time, but the full story of Bobby Soxx is present in a relatively fair and balanced obituary by the Dallas Observer.

Sources & Further Reading
Thank fuck for James Burns' book, which, while unwieldy, extremely detailed and long as hell, has all the stories and attempts to clear up contradictions needed to confirm some of the things that were unclear about the band. Likewise to Michael Azerrad's Our Band Could Be Your Life which cemented a lot of ideas I was only just forming when I first read it...music journalism sucks, but a book like that is enough to change someone's entire worldview which is proof positive that it only mostly sucks. Some other sources...