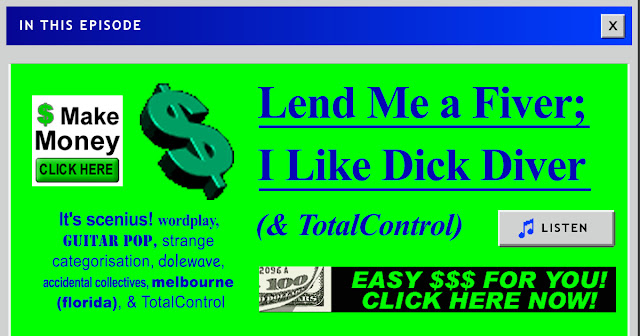 Episode 11 finallllyyy comes very close to the present day with two bands from Melbourne, Australia who started in 2008 and played through the 2010s. In Dick Diver we find the jangling guitar pop band who unwittingly spearheaded a non-genre...and in Total Control we see an intimately related band, who turned to sounds of mania, dystopia and paranoia to become one of the most influential bands of the decade.

Listen now below or anywhere else you listen to podcasts.


Lend Me a Fiver; I Like Dick Diver
There are some things you shouldn't bring back from the dead, and boy oh boy was I worried about reviving the whole dolewave conundrum. This episode differs from every other episode in the series because in the timeframe and communities it discusses, I was there in the room for a lot of it. That made it surprisingly difficult to write, particularly when it came to referring to the internet storm that was the discussion of dolewave in 2014 (where one of my own tumblr posts contributed to that storm). It really is hard to describe just how much of a shitstorm in a teacup this kinda thing was at the time, for what was a very small amount of people.

I do think though that nicknames like this for briefly appearing sounds can be kinda under credited for their usefulness? If that makes sense? As ridiculous a conversation the dolewave controversy was, it was also one of the only recent attempts at categorising or grouping or thinking about a growing sound in recent memory. That is... I mean if we somehow get funding for a second season in this climate we'd necessarily have to talk about the Egg Punk V Chain Punk spectrum but there's an entire thesis in that one.


I Live in a Hole; I Like Total Control
For anyone who paid attention to the trailer for this series, this episode was supposed to turn to The Clean and The Flying Nun sound as a parallel to dolewave (which it very much called back to, accidentally or otherwise)... but when it came to actually filling out the notes I had running it made a lot more sense to shift to a more closely related and contemporary band. In writing about Total Control and re-listening to them, it became more and more apparent to me that they're one of the most incredible bands of that decade... Henge Beat as a a package, as a 'complete' record, is really, really special I think.


I found this episode really difficult to write, really difficult to put a history to such a recent set of events. It's definitely becoming a bit intangible or nebulous to talk about contemporary subculture and its fate or meaning. Would love to hear some more thoughts on this kind of thing, please comment if you feel like it!

Conspiracy Threads
The number of bizarre coincidences that hit around the time this episode was written were kinda eerie. I originally included it in the script but I sounded like a proper nutjob...but the Australian Government re-named New Start again on March 20th 2020 (4 days before this episode launched). From the Unemployment Benefit (194x - 1997) to NewStart, it's now named the 'Job Seeker Benefit.' That's particularly creepy because the next day, a shutdown of all 'non-essential' businesses came into effect due to the COVID-19 pandemic, which raised Australian unemployment to 20% at the time of writing... the Human Services website crashed when 90,000 people tried to access it to register for the dole as 'Job Seekers' and then.. we launched the episode that is kinda half about welfare.


Sources & Further Reading
Some sources! As we're dealing in very recent Australian history, a lot of this ended up being first hand experience... unfortunately Mess+Noise is long deleted but can be accessed in part via the Waybackmachine. Will add to this list when I get more time, but here are some of the articles and books and items mentioned in the episode or where quotes and facts were taken from. The intro is a little strange but I thought it pretty closely related to the ideas Dick Diver and Total Control dealt with... In 2017 I consulting for a start-up company and all that ridiculous language was driving me truly, truly insane... it was that which led me to writing this intro eventually, and then I found the great book Keywords by John Patrick Leary. It's an A-Z so best left to flick through on the shitter, but definitely need to credit that for making me realise it wasn't just me that was experiencing all that 21st Century psychosis.