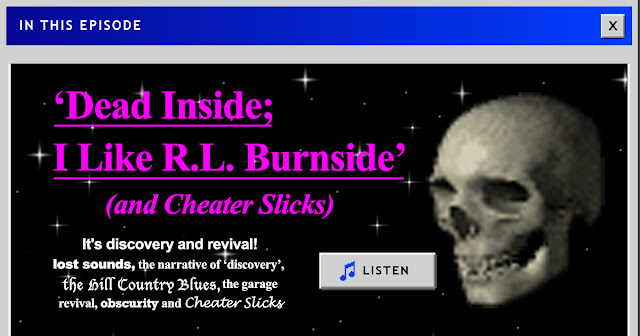 The last couple episodes dealt with the reactions to punk in the British post-punk movement and the absurdity of the Texan anti-punks, but this one takes a formal, yet indirect step into the 1990s. We get to that decade's garage revival and the story of the most unloved band of the non-movement in Cheater Slicks. But in the spirit of revival, we reach back to a blues player who was unexpectedly lifted from obscurity by a crossover record with the Jon Spencer Blues Explosion: the incredible R.L. Burnside.

Listen now below via your favourite podcast listening method.

Dead Inside; I Like R.L. Burnside
There are dozens of different roads you could take in telling the story of R.L. Burnside and the Hill Country Blues. I tried a few of them that might have covered more bases when drafting this episode...but this was the most balanced one I could think of when force-fitting the tale to emphasise his clash with the '90s garage revival. One of the dynamics between R.L. as an ageing Blues player and his rise to public fame in the '90s was only really hinted at, and that was the interplay between himself and Fat Possum Records. That story gets some coverage in the You See Me Laughin' documentary (a great doco that just needs Bono and Iggy Pop removed from the fucken thing). I didn't get a chance to have a deep read of this, but Jacqueline Sahagian wrote a Masters thesis on the interplay between Fat Possum and the Hill Country Blues players that touches and all the things I glossed over.

R.L. Burnside is but one of many Hill Country blues players I would have liked to talk about...the playlist covers a few of these, but it's worth a deep dive to explore people like Jessie Mae Hemphill in particular, Fred McDowell, T-Model Ford, Junior Kimbrough, Cedell Davis and Othar Turner. The Hill Country style has a magic that I just never really felt in the more famed blues players, and while that may be something to do with the sound...I've also wondered if there was something else going on in that instinct. Did it take having a contemporary record label like Fat Possum to influence my tastes? Or the fact that the style didn't popularise until the '90s? Some soul-searching may be required.


I left out some really great stories about R.L.'s past too, in the interests of time. In '67 R.L. played a show in Montreal that he arrived late to after hitting the town...and rushed up on stage, peppering his set with Lightnin Hopkins and John Lee Hooker covers. When he returned back stage he was then stunned to find both of them sitting there staring him down, until Hopkins put an arm around him and told him that he hates when people mess his songs up, but that R.L. was one of the few people who could get it right.

There's also some conjecture around that Fred McDowell had something of a wariness about R.L., worried that Burnside was gonna steal his limelight (which, long game, he kinda did). There's an unverified story that when George Mitchell came to the Hill Country to record the local Blues players that McDowell tried to prevent R.L. from getting heard... with Othar Turner eventually taking Mitchell to hear the Burnside sound. I couldn't really find a hard truth on this so left the story out, but maybe a lot of master/apprentice interplay goin on here. Again, like many characters that appear briefly in Barely Human... I think the Hill Country Blues should have a series dedicated to it.

I Hope This Sticks; I Like Cheater Slicks
You know, out of all the can of worms this series opens when I dive into talking about a community or sound or scene, one of the haziest was the '90s garage revival. It's hard to define it, as one of those things that was absolutely real to anyone who was a part of it or listened back to the record that came out of it... but again: what is it? All I know is that I'm certain that this is the world that's gonna flood me with corrections and "well actually's" more than any other so that's maybe saying something.

I had already written the episode when this book arrived in the post from a loooong shipping period, but Eric Davidson's We Never Learn: The Gunk Punk Undergut is evidence of the garage revival as a scene/movement. He went with calling the sound 'gunk punk' which Byron Coley kinda shrugs at in the foreword, but what other options were there? I mentioned it a bit in the post-punk episode that it seems like a lot of the time, a community and movement can be left totally forgotten purely because it never had a name. Maybe that's reaching, but a little bit true no? It's a good read if you're interested in that world (though it becomes apparent after the 13th interview with someone who's greatest claim to fame is pissing their pants that the 'gunk punk undergut' is difficult to story for a reason).

So why Cheater Slicks? The obvious story would be to throw to Pussy Galore and re-tell how Jon Spencer came to become a figure of the garage revival, and an early outline began with the Pussy Galore story before leading to Burnside... but I really wanted to forefront R.L's story, not have it left as yet-another-Blues-'discovery'-narrative. I also found it hard to get enthusiastic about Pussy Galore, or the Blues Explosion...who have their moments, but Cheater Slicks...for reasons I will never fully comprehend, are just the band from that era for me.

I think a part of my love for Cheater Slicks beyond all else for the garage revival is their lean towards the misery and existential death drive that's a lot more relatable than the garage revival's 'woooAH MAMA' sensibility? I also see something weirdly interesting about their persistent need to keep playing despite attracting fuck all listeners. They're absolutely the runt of the litter of the 'gunk punk underground' which is really saying something. In saying that, while I admire 30 years of Cheater Slicks tenacity, I also don't wanna see my friend's bands playing for another twenty fucken years so maybe that's best left to bands outside the circle.


Conspiracy Threads
It is a conspiracy, the unexpected connections between the bands in this series. On doing some research on some of the covers of Cheater Slicks, I discovered that a couple of the originals were recorded at Fleetwood Records in 1966, only a few years before the Shaggs got there. Maybe that's a stretch, but there's something strange and eerie to me about these characters passing through, even if distantly. That Cheater Slicks would reach back to a Fleetwood record in the time The Shaggs were confusing the studios engineers feels to me like they were in the same room. Maybe that's spiritual quackery?

Sources & Further Reading
Always indebted to other works! George Mitchell's documentation helped shape this story, the doco's lent audio grabs and a great feel of the Hill Country... and Cheater Slicks story was taken from a whole host of interviews that I for some reason cannot find when under the pump (recording Ep's 11 & 12 tomorrow and the scripts are...not...complete!) Will update this blog when I get the time to cite properly :/