Ep 10. Nothing Pleases; I Like Country Teasers (...and Lucille Bogan) 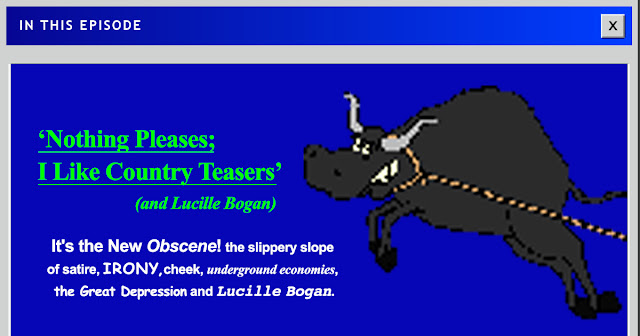 Last episode we came up into the '90s garage revival, and we stay there (tangentially) with "evil country outfit" Country Teasers. We look at their stumble down the slippery slope of satire before shifting all the way back to the 1920s to find Lucille Bogan: maybe the most radical song-writer who ever lived.

Listen now below or anywhere else you listen to podcasts.

Nothing Pleases; I Like Country Teasers
This episode is another one based off one of the zines / print essays written back in 2016 that kickstarted this series (more on that here). That was supposed to be the end of a zine trilogy before I moved on to writing something else. The zine itself received a lot of criticism, not least of all because much of the other writing about Country Teasers out there refers to them as a Scottish band (who mostly played in London; I had to try very hard to resist stoking that flame by just piping the word GLASGOW throughout the entire episode). It also copped the ire of many Country Teasers fans who didn't like it, and the ire of people who read it as me platforming someone who uses hate speech for satire. I tried very much to sit on the fence in the zine, but in hindsight I don't think it was the right approach...maybe this episode is a bit more reflexive and puts things into context in a way that better represents how I feel about them?

Episode 9 and 10 are closely related, and it probably would have been easier to have a 'garage rock' Cheater Slicks / Country Teasers episode and a blues episode feat. Lucille Bogan and R.L. Burnside, but it didn't materialise that way when I was writing it. The approach for these episodes has always been to list off some thematic threads I wanted to follow, and then find two bands who pair with them... so for Burnside/Slicks it was 'discovery'/revival and their place in the '90s. And for Teasers/Bogan, it was the obscenity in different contexts. I hope it worked? I don't know if I'll ever be able to express how I feel about Country Teasers, it's an internal wrestle...

I should probably note how much my opinion has shifted with the Country Teasers / The Rebel approach to songwriting over the past five years or so, which is maybe a part of why it's so difficult to communicate; inevitably I feel like I'm a hypocrite. There was a time when I felt with full certainty that songs like these satires (the Randy Newman's 'Rednecks' type) were somehow important, or a clever weapon against the rising scourge of the woke moderate: a way of exposing the prejudices of people who didn't think they were prejudiced. I feel very differently now, and I think there are ways to send those messages without having to potentially hurt someone...the satire defense is, I think we all know deep down, a very weak one.

At  time of writing, the tour doco This Film Should Not Exist is due for release soon, made by a couple of Italian filmmakers who followed the Country Teasers / Oblivians EU tour that was mentioned briefly in the episode. For some reason, that tour seems to be one of the main pieces of folklore about the band in the zine 'literature'...maybe this doco gets to the bottom of that, or maybe it's just a notable event for a time where bands like CT had very few notable events to put in print.


As for omissions? Oh there would be plenty, lots of missed band members and other projects the band members were involved in (The Male Nurse being prime among them)... Wallers' solo(ish) project The Rebel could also have been the subject of the episode, but I tend to prefer the Teasers records than The Rebel records (though Prawns is very good!) One thing that wasn't discussed but probably bears mentioning is The Rebel's logo, which Wallers calls the Spakenkreuz. It was too difficult to put into words for this episode. The spakenkreuz was devised as an anti-nazi symbol, a swastika with one arm bent over on itself to 'break the cycle' while also resembling a person running in fear. Of course the intent was always to LOOK like a swastika in order to gain from the shock effect while having a progressive message so as to not get in trouble for brandishing it right? I get it, I weirdly and uncomfortably like it and believe in it, but in the end (like with all Teasers/Rebel) music, the effect it has (revulsion) gives the symbol its meaning.


I Need a New Slogan; I Like Lucille Bogan
I haven't been able to find the original quote, but somewhere it's written that "every generation is surprised to discover that the last one was fucking." That quote was on my mind when I was writing the Fugs episode, and the Lucille Bogan section, and I think in the time of "OK Boomer" is an important quote to remember? There's a minor goal underlying the Barely Human series of attempting to draw some intergenerational lines (to unite the underground b/z-oomers) to show the similar approaches between the past and the contemporary. Who knows if there's any point to that really, but by the time we get to the weirdos of the present day, and in starting with those of yesteryear, I think it could be clear to a 16 year old and a 60 year old that we had common approaches and beliefs. Maybe.

To throw back to the 1920s in the part of the series that's supposed to be coming to the contemporary might be a little disappointing then, but when I got to writing again about Country Teasers I remembered the one Lucille Bogan song I heard a while back ('Shave Em Dry II')... and wondered if it was worth diving back a hundred years to explore her story. So glad I did because her songwriting is incredible and she's maybe the hero of this entire series: predating all the 'edgy' songwriting of the series proper made her story a necessary one to tell if I was ever going to get this series  right. (If this were a book version which I initially wanted to do with Barely Human, you'd even steal Greil Marcus' Mystery Train format and open with a Lucille Bogan chapter in place of Harmonica Frank.)


Lucille Bogan's story was a little difficult to piece together because there are only skerricks of info out there, and undoubtedly a lot of that is exaggerated or dampened or skewed depending on who was writing about it. Luckily most of the writing has been done by people from the Blues communities who tend to be sliiiightly more interested in the facts that the punk writers of years passed. I'm hugely indebted to the PhD thesis written by Linda Moroziuk called Locating Lucille Bogan who dug through and fact-checked the info that's out there, transcribed all of Lucille's lyrics, and put it into context with the times as well. It's really well done and I hope it gets published as a book in some form. I took a slightly different approach and interpretation at times, but it's really great research an worth a read for more info.

Conspiracy Threads
I had to remove some tangents that took up too much time and space, but I wanted to talk a bit more about the era of the 78s and 10" shellac vinyl when it came to Lucille Bogan, but that kinda linked with the Cheater Slicks episode so didn't quite work out. I think there's an interesting connection from the vaudeville/phonograph era, to the amateur '50s garage rock bands, to the '90s garage revival that I haven't really heard discussed. The early blues singers who recorded on the 78s, that when the '50s came around, became of interest to record collectors looking for bargain records.. who then started amateur rock bands. Those garage bands then got picked up by the '90s garage revival and maybe as a result the 10" vinyl made a brief come back in the era? That's all a bit of stretch...

Of course, Country Teasers first release was put out on 10" vinyl, and that is maybe in part due to the garage revival putting it back on the table... but it's  more likely a nod to The Fall's  Slates 10."  With Slates, Mark E. Smith demanded it be released as a 10" because the band was rising in popularity and looking like they'd chart with their next release. Being  blissfully anti-industry, the 10" release was the only way that Smith would be saved from the singles (7") or album (12") charts....


As far as connections across episodes... not so many, but Country Teasers used to cover a couple Butthole Surfers songs and Randy Newman's 'Short People,' so it wasn't totally crazy to put them in context with each other. While Wallers is an on-the-record Butthole Surfers fan, seems 'Short People' is the only Randy Newman song he's aware of. (Which is crazy to me cos no one in this series has a closer songwriting approach than the Newman/Wallers combo in my mind!)

Sources & Further Reading
Some sources! The zine literature... I've lost the compilation zine of all the Country Teasers writing compiled that I relied on to write the Nothing Pleases essay so can't remember what it was called or how to credit it... but it exists! Others include the below...