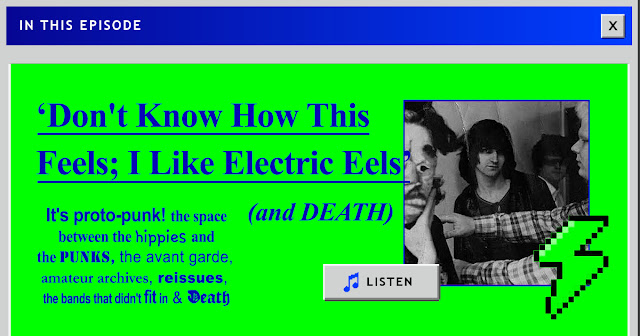 Episode 4 of Barely Human continues on from '60s outsiders The Shaggs and Roky Erickson to find two acts who began making music in the time after the hippies, in the proto-punk space. Dunno How This Feels; I Like electric eels (...and Death) is set in the US mid-west in the early 1970's, and finds Cleveland misfits the electric eels, "the band who didn't fit in with the bands who didn't fit in," and a band from Detroit who never landed a record deal despite making music a decade ahead of their time because their name...was Death. You can listen to Episode 4 at the links below, or wherever you listen to your podcasts.

Show notes! Featuring sources, further reading, playlists and more discussion that didn't make it to audio. First, here's the Spotify Playlist to follow the episode with: this one features electric eels, Death and a bunch of their disconnected Mid-Western proto-punk peers (including Melbourne band the UV Race's cover of Dave E's 'Love Meant to Die,' which features in the outro to the episode). If you'd like to get in touch to chat more or give feedback, follow us via @barelyhumanpod on Twitter, Facebook or Instagram or email me at max@barelyhuman.info.

Some missing links, omissions and extra details below. And an error here: somehow missed the electric eels Eyeball of Hell compilation released in 2001 on Scat Records, predating the 2014 Die Electric Eels LP by a decade. One of probably many, many oversights to come...

Dunno How This Feels; I Like electric eels
This episode flies loose with the facts due in part to the unreliable archive of the proto-punk space (and thus became a part of the episode's theme), but there were also a looot of oversights. Somehow forgot to mention either of the band's drummers, both of whom played with important and related acts. Jim Jones played with proto-punk heroes Pere Ubu, Mirrors and The Styrenes, while Nick Knox of the Cramps was a one time eels drummer. Most of the time an omission of a band member I don't lose much sleep over, but that's a rich connection to a broader world the eels were a part of that was missed ...and even though it probably would have been edited out as a distracting tidbit, it would've been nice to have in the audio.

I'm not sure there was a whole lot I wanted to add about the band, maybe the stylisation of electric eels as all lowercase as a nod to e.e. cummings? That didn't fly in the narration, but I got a kick out of imagining a pack of pre-punk twenty year olds running around idolising cummings, Duchamp, John Cage, the dadaists etc...all of which paint a really intriguing picture of their place in the proto-punk movement, just before many of the punks went full-blown anti-art/anti-hippy only to be supplanted by the chin-stroking post-punks. There's an episode in that alone, but will get explored somewhat next week with Black Randy and in a few weeks time with Television Personalities and The Raincoats (Ep 7).

This episode is probably a good time to bring up a (maybe) controversial aspect of the show: the approach to research that relies entirely on the existing/available archive. It's true that for a lot of the uncertain aspects of the band's history, I could've (should have?) reached out to Morton or McMahon or anyone present at the time to clarify the unknown bits (e.g. did they play four or five shows in total?) Likewise it would've been nice to interview Randy Newman, or Ed Sanders, or the members of the Shaggs, or anyone in the series...but a big part of me thought that does a disservice to the people in the series that have died, or are unwilling (or incapable) of communicating their stories. For the sake of consistency, for better or worse, every episode takes the 'facts' from the backlogs of the internet, the dead geocities pages logged on internet archiving machines, the uncited interviews found in the pages of zines...and written hearsay. In saying that, I'd love to hear from anyone who has more to add to this kind of conversation, maybe I can fill out a blog or a bonus episode with missing ideas: email me at max@barelyhuman.info

The world surrounding the band - and the era in which they were looked back at - also very much influenced the visual elements of this podcast. The websites ClePunk.com and electriceels.com kickstarted a larger discussion about replicating the look of lost websites and spurious sources that this episode in particular fell into. More on that and Alex Dabi Zhevi's Barely Human art here.

I Like Death
Initial drafts of this episode went on to discuss more of the Ohio proto-punk world that interacted directly with the electric eels. Namely, Mike Rep & The Quotas whose song 'Rocket to Nowhere' I think is the proto-punk anthem...there was a time when this was going to shift to Pere Ubu as well, or continue with X_X, but it felt like the story repeated itself a bit (no doubt there are many more interesting threads to follow in that direction). Instead, the story of Death seemed way more illuminating, considering it occurred just a short drive over in Detroit, in almost the exact same time frame.

Death's story, and the band member's sons/nephews finding the band in the 2000's brought a whole other side of the story of the reissued band that ties in with some other themes in the series. That the instinct to make music like this would cross a generation unknowingly, with the kids of the members of Death playing in punk cover bands (going on to form the band Rough Francis) without knowing their parents played punk before the sound had a name? Good story, but it should also be noted that the Hackney's entirely reject the notion of being a punk band (proto or no).

I would have liked to spend more time on the bemusement of Death at their comeback too, which was a hilarious aspect of the Band Called Death documentary. It's undeniable now, listening to Death, that they were an incredible band that should have been talked about alongside the MC5 and The Stooges as the progenitors of punk, and I loved this quote by Bobby and Dennis about that notion.

I didn't get a chance to harp on at any length about the idea of the self-made archive outside of an aside in the outro...but huuuundreds of bands from this generation (2000s-2010s) had likely their only recorded music lost forever in the failed MySpace server migration in 2019. Good thing to note if you (like me) have much of your old band's music saved on a soundcloud, bandcamp or any version of ~the cloud~

Sources & Further Reading
As mentioned, many, many, many dead websites and contradictory interviews and sources put the narrative for the electric eels together (see a sample below), while Death's story came together via a combination of interviews that followed the release of the For the Whole World to See LP and the great doco A Band Called Death.