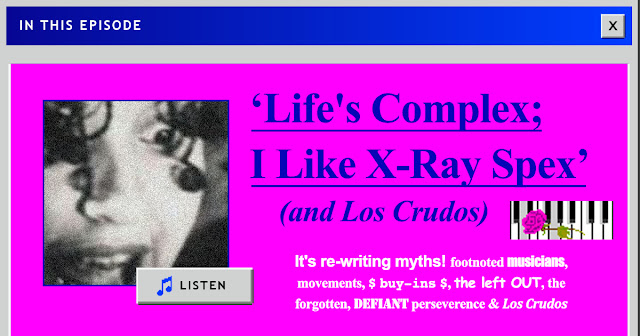 Episode 5 of Barely Human may have been the first formal step into a punk community (via LA's punks), but Episode 6 takes a more ground zero approach, in London 1976. Much of the focus of this episode is on shifting the lenses through which we look at social movements to get a richer picture of something that's been told and retold ad nauseum. So we looked at London punk through an often footnoted member of that community, X-Ray Spex. Through a similar approach to hardcore, we skipped the genre's advent in the '80s to leap ahead to a band that was not just vital contributors to 90's hardcore, but hugely influential on a cultural and socio-political basis: Chicago's Los Crudos. You can listen to Life's Complex I Like X-Ray Spex (...y Los Crudos) at the links below, or wherever you access podcasts.

To the show notes: some sources, further reading, playlists and more discussion that didn't make it to audio. First, here's the Spotify Playlist: this one goes from X-Ray Spex to other members of the London punk and post-punk community often swept over when looking back.. then Los Crudos, and some other hardcore bands who put their identities at the forefront of their music. Follow us via @barelyhumanpod on Twitter, Facebook or Instagram or email me at max@barelyhuman.info.

Life's Complex; I Like X-Ray Spex
There were a few threads in the X-Ray Spex story that we didn't end up following...sometimes to keep the stories concise, sometimes because I felt it distracted from the story. The main one I think was some tension between the band's original saxophonist Lora Logic (who went on to play in the post-punk act Essential Logic) and Poly Styrene that came after external media pressure. Punk journalist Jane Suck wrote in Sounds Magazine -


Poly has to work so hard because her girl saxophonist allll dressed up in buhhhlaacck, La La Logic, is stealing the show and copping some great licks. The tenor sax sound IS X-Ray Spex.

And according to Lora, she was kicked out of the band via their manager soon after. The two reunited by chance in the Krishna temple they both stayed in after X-Ray Spex broke up. This omission was made to cut this episode down to time: initial drafts ran very, very long.

The 1979 BBC documentary Who is Poly Styrene? can be viewed in full here, and captures her at the peak of the uncomfortable heights of the band. Though there's plenty of footage and discussion of Spex over time, their role as footnoted musicians is important in this episode, as someone who was swamped by the narratives of the bigger names around them who I think were far less interesting than X-Ray Spex was ever given credit for.


Los Gringos Son Brutos; Me Gustan Los Crudos
Expecting a little blow-back for choosing someone from the '90s to bring the hardcore story into the series, but I hope that the episode does justice to how powerful and important Los Crudos are to that timeline. I think that Los Crudos putting message and identity first changed a lot about hardcore as an artistic outlet, and its tie into the DIY ethic opened up hardcore to a larger audience. White Riot (links at bottom of this blog) is a great book that explores that line of thought in detail, really recommend it.

Something I only really found out about in discussions after the episode was recorded was the link Los Crudos opened up between the punk/hardcore communities in the US and Central/South America. They made efforts to routinely tour South of the US border and created a channel of artistic solidarity that few others had attempted prior (at least with that level of regularity). Some footage below of a 1994 show in Mexico.


Credits: Production, Guest Contributions, and More!
Barely Human was produced by Jason L'Ecuyer and Output Media. Sydney band Tim & The Boys created the show theme, Yuli & Jacc Gears of Sydney band Negative Gears re-produced 'Oh Bondage Up Yours' by X-Ray Spex and 'Crudo Soy' by Los Crudos. The cast of this episode who played various characters in guest read form are below...


Sources & Further Reading
Got very lucky that an oral history of Poly Styrene and X-Ray Spex was published the month I sat down to write this episode. Much of the Los Crudos section came from a series of interviews compiled in the book White Riot, which is a necessary read not just for any 'punk listener,' but I think for appreciators of any art form.