Ep 7. Lost in Trivialities; I Like Television Personalities (...and The Raincoats) 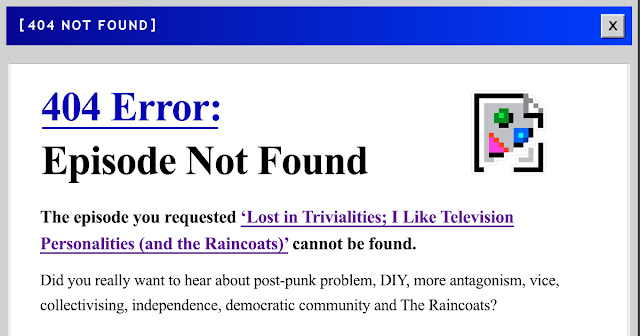 Episode 7 of Barely Human continues on from last week's look at the London punk explosion to see its rubble in the post-punk space. It looks for some kind of (in)formal marker for when post-punk began in the incredibly packed timeframe of proto-punk to punk and post-punk, and claims (maybe controversially) that it began in 1978, when Television Personalities released 'Part-time Punks.' We then go on to talk about one of the best of the post-punk acts, the band who seemed to cover every positive aspect that made it an often unacknowledged movement: The Raincoats. Listen now below via your favourite podcast listening method.

Lost in Trivialities; I Like Television Personalities
This episode chose to focus on the first TVP's 7" to align them to the commencement of post-punk before following the more major shifts towards their more devastated sounds of the '90s...which excludes a massive, massive (and great!) discography. There aren't many bands around with this many releases that are so consistently good and unique, maybe The Fall? Again, another band who could have a whole series dedicated to them. 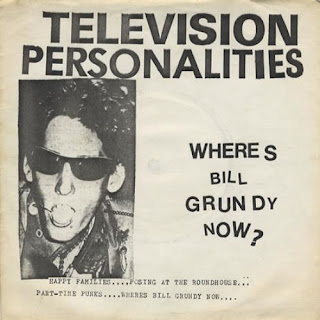 Failed to mention much about Jowe Head, former Swell Maps player and core contributor of the TVP's through the mid-80s and '90s, and I think is largely responsible for encouraging that darker sound that ended up on records like Privilege. I missed a lot of good connecting points like this, if there was more time I'd run a whole ten minute side piece on Swell Maps who are one of my favourite ever bands and linked really closely with both the TVPs and The Raincoats...

In the episode I chose not to follow Dan Treacy's personal story too closely, whether that was the time in prison, his problems with addiction, or his current life where he's recovering from a stroke in a nursing home and I hope doing ok... Maybe if it wasn't an episode about the collectives and community of post-punk England it would have been worth going down that road, but there is a bit of discomfort for me that I felt when going into the Roky Erickson story for example...there's story telling, and there's history, and then there's just flat out peering through the neighbour's blinds. In saying that, there are whole threads and rabbit holes to follow in Dan's blog which is perfect anti-art web design that Barely Human adores... I didn't use any material from here in the ep but illuminate thyself.


My Personality Has Moats? I Like the Raincoats (...moats?)
Initially I had this episode written to start with the Raincoats and turn to the TVP's, we even recorded the entire episode and then...realised that it needed to move up to the hope of The Raincoats, not go from The Raincoats alignment to second wave feminism before switching to the TVP's millionth wave British boy cynicism. I think it worked better this way even though a day was wasted in the recording booth! Not linking well to a photo or video right now, but brief mention of The Raincoats live show was made in the episode: here is a video of the 1978 Raincoats live show.


There were a lot of omissions surrounding The Raincoats as well, particularly around their resurgence in the '90s. It is maybe a little historically inaccurate to use this omission and I've done it for a number of bands in this series, but The Raincoats, The Shaggs, Butthole Surfers (to a lesser extent) and some bands not mentioned like Daniel Johnston and Flipper for example, were given resurgences in the '90s because of a place on Kurt Cobain's favourite album list. A lot of people telling the stories, particularly of The Shaggs and Raincoats like to use this as proof positive of their cultural worth, and I don't... like that. One of the mission statements I gave myself with Barely Human was to find a way to tell an alternate underground music history without name-checking any of the bigger names that overshadow their oft-forgotten peers...this made it hard at times, and unavoidable in Episodes 6 and 7 when it came to having to mention Sex Pistols, Ramones or The Clash... but doing the same with Nirvana and Kurt Cobain revealed something more useful I think. To say that The Raincoats revival was the doing of Kurt Cobain (whether true or not) completely reduces their contributions...to say that they existed and were wonderful and had a revival of interest because people heard them I think speaks much more fairly to them, even if it skims a minor factoid that seems irresistable to the fame-loving world of historians. 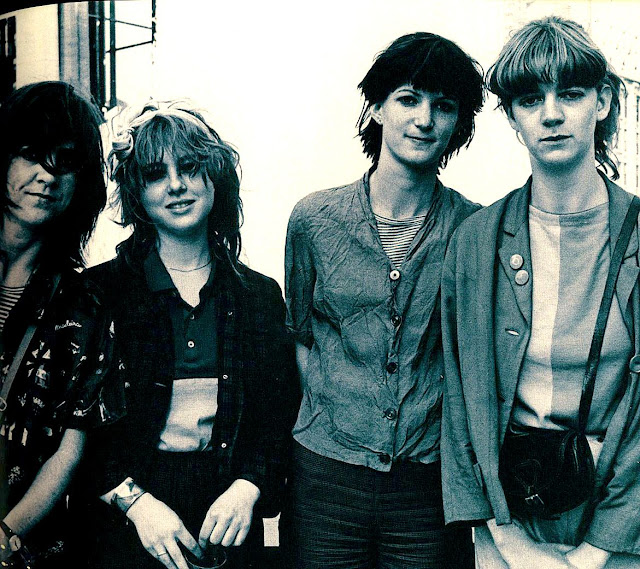 Conspiracy Threads
There's always a bit of mania that goes into writing an episode of Barely Human...a lot of scribbled down arrows on a piece of A0 cardboard trying to find links between bands that cement the idea in my head. I kinda knew innately that there was a TVP / Raincoats connection and the Ana De Silva quote of "we're full time punks" stuck...but there was also a drummer in London who played on both The Raincoats second LP Odyshape and Television Personalities Privilege named Ingrid Weiss. I probably spent a day looking for a deeper connection for Ingrid's drumming in the world of post-punk London...ended up with a blurb in a blog in support of an episode...a job well done?