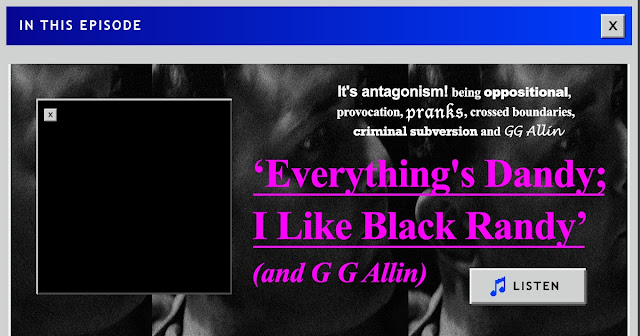 Episode 5 of Barely Human continues from the proto-punk space to to the advent of punk around the magic years of 1976. Through the eyes of the genre-adjacent antagonist Black Randy (and his Metrosquad) we start to draw a line to where antagonism loses its counter-cultural zeal, and then see it horrifically crossed with the "Madman of Manchester," GG Allin. Listen to the episode through the links below, or wherever you listen to podcasts.

Show notes! Sources, further reading, playlists and more discussion that didn't make it to audio. First, here's a Spotify Playlist to follow the episode, focusing on Black Randy and GG Allin's music, it's divided up by members of the LA punk scene and the aggressors of the scenes around them. If you'd like to get in touch to chat more or give feedback, follow us via @barelyhumanpod on Twitter, Facebook or Instagram or email me at max@barelyhuman.info.

Some supporting info and other threads below:

Everything's Dandy; I Like Black Randy
Black Randy was a difficult subject to pick out among the rubble of L.A. punk. A much more positive episode could have been written about X or The Germs, or any one of the more successful members of the community. But Black Randy was such an outlier, while also being an integral part of the first wave of US punk that it was a necessary fit for the Barely Human series. I missed mentioning that he was a co-founder of Dangerhouse Records...but there are loads of missed tidbits like this. The sheer magnitude of Black Randy stories, that are all conflicting and distracting makes it a real challenge to pin him down among all that. And considering he was a pathological liar? Most of the stuff I used as fact from his own testament...can probably be discarded too.

Below is the image mentioned in the episode as the end of Black Randy's racist imagery and mocking identity theft. While it's easy to lump this in with the comedy of the late '70s (and onwards), and sometimes I do think it can be fraught to use a contemporary lens to view an event from forty years prior...you can absolutely make your own call about Randy's relationship to race with a photo like this. 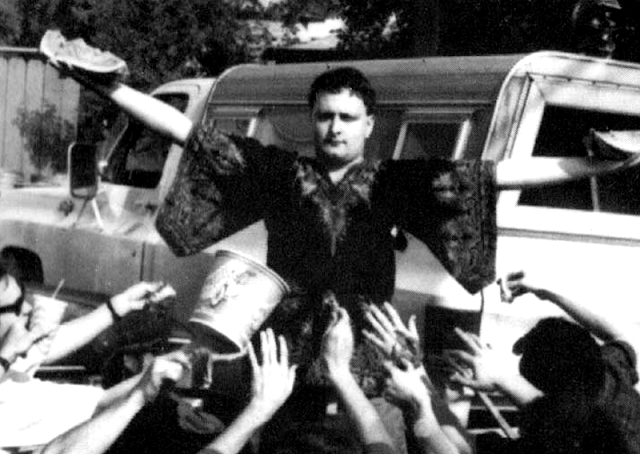 I Shouldn't Be Tellin'; I Like GG Allin
Talking about GG Allin was always going to be one of the hardest parts of this series, and I don't know if I could ever be happy with the portrayal and discussion of him and his actions. I thought it was important to not shy away from it, but on re-listening I realised I softened a lot of the more criminal and repulsive parts of his life, mostly through my own discomfort with wanting to delve  into the worst of his history. For that there's some much better reading that I've included at the bottom of this blog post.

There's a side of this discussion I didn't spend enough time with purely because I didn't want to spend any time condoning GG's actions. I did want to explore the way people might look at a punk musician committing these acts, versus that of an institutionally-approved performance artist. I briefly mentioned GG's public defender trying to draw a line between him throwing shit at a crowd and the work of Samuel Beckett and Shakespeare...but why do we find that so absurd now? That argument is a little weak, because I think GG got away with a lot of foul shit because  it was largely kept to the stage, as part of the performance...and I don't know what to say about all that really: hence it hides in the show notes rather than being teased out in the episode.

Of course, I chose to use GG as the limit of antagonism...but there are far more terrifying stories outside of the world of US punk. Japanese band GISM and their on-stage flamethrower, or walking a running chainsaw through their crowd should almost definitely be an episode unto its own. I'm sure there are more violent stories than even GISM.

Conspiracy Threads
I lost my notes on this episode but I remember lots of them beyond the fact that Black Randy and GG both died at the same age. Maybe this photo of GG Allin and Roky Erickson (Ep 3) does the job? 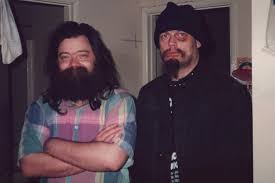 Sources & Further Reading
Lots of lost interviews across the web made up the research for this episode, I'll try track them down and include them in this list when I get a chance, but here are the main sources I turned to for getting to the bottom of Randy and GG. Medium's GG Allin piece is a great read, and while many will think of it as over-thinking the guy, I think this is sometimes the kind of thinking you need to come with for characters like that.

We Got the Neutron Bomb: The Untold Story of L.A. Punk - Marc Spitz & Brendan Mullen (2001)
Turned Out a Punk Podcast: Episode 137 - Interview w/ John Doe by Damian Abraham
I Was a Murder Junkie - The Last Days of GG Allin - Evan Cohen (1999)
Trouble at the Cup (and Everywhere Else) - blackrandy.com
GG Allin: A Freudian Analysis - Gus Perry (Medium, 2017)