Ep 2. Barely Human; I Like Randy Newman (...and Frank Sidebottom) 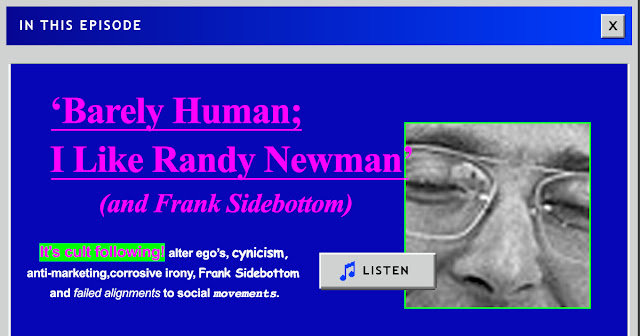 Following on from The FBI Are Mugs; I Like the Fugs is the second episode of Barely Human, the episode that gave this show its name: Barely Human; I Like Randy Newman (...and Frank Sidebottom). It focuses on two musicians who more or less self-sabotaged their careers for a snarky joke at the world, collapsing under their corrosive levels of irony and ending up mis-remembered by the broader culture. In their failure to connect to the social and artistic movements that surrounded them, they ended up as loners who tended to serve their cult following...but I think won out in the end despite themselves. You can listen to Episode 2 of Barely Human at the links below:


Here are some show notes! A bit of elaboration about some components of the episode, some behind the scenes stuff, sources and further reading and thank yous and crediting and playlists for you. Follow the episode up with the Ep 2 Spotify Playlist...it begins with some Randy Newman songs and some of the better covers of his music through time, before going to the original songs that Frank gleefully butchered. Might serve as a brief launching pad for their music and the worlds around them, please listen and if this blog isn't enough, then direct your mail to max@barelyhuman.info or any of the social media hubs via @barelyhumanpod.

I probably did a disservice to Randy by framing him as under-recognised and forgotten due to his film work masking his career, but in his younger years he was deeply respected by his peers. His songs have been covered by people as wide-ranging as Nina Simone, Ray Charles, Judy Collins, Etta James and Harry Nilsson, who released an entire record of his music called Nilsson Sings Newman in 1977 (v punk). Even people like Bob Dylan considered him one of the best:


To me, someone who writes really good songs is Randy Newman. Now Randy might not go out on stage and knock you out, or knock your socks off. And he's not going to get people thrilled in the front row. But he's gonna write a better song than most people who can do it. It doesn't get any better than "Louisiana" or "Sail Away." Not that many people in Randy's class.

But maybe his strangest relationship with his peers came in the form of those who did what he couldn't with his music. Three Dog Night turned 'Mama Told Me Not to Come' into a party anthem (the song is about a nervous kid of the '60s clashing with the counterculture), and both Tom Jones and Joe Cocker made huge hits of 'You Can Leave Your Hat On,' by playing it up a key and making the chorus a celebration rather than a snide mockery. Randy's initial intention (he plays this slow and flat, and mumbles most of the lines bitterly - no wonder it languished on the B-Side of his LP rather than storming the charts) was to write a parody of male lust and perversion, but Jones and Cocker took it to the Top 40 with one hand on their crotch.

A connecting theme of this episode was the idea of self-sabotage, but for Randy there was also this unmentioned aspect of sheepishly following the opportunities that came his way. We mentioned the fact that 12 Songs was essentially written to follow the rising interest in the '70s singer-songwriter, but there were other weird events, like writing a jingle for Dr. Pepper in 1977.


There's been an unexpected resurgence in interest in Randy Newman in the years since this episode was first drafted, maybe peaking at his appearance on a Chance the Rapper song in 2019, '5 Year Plan.' Here he appears as the sage-old-man guest vocal role, but chooses to make his own wry mockery of that trope... finishing the song with this meaningless piece of advice: You can get over anything, almost / I'm telling you the truth / The one thing left to say is...

Welcome to Sodom; I Like Frank Sidebottom
Linking Randy to Frank felt like a bit of a stretch at first, but I think it feels right in the episode. So much of Randy's history is tied up in the unreliable narrator, in dipping his toes in and out of character-driven portraits, mock revelations and viewpoints that can be either entirely his own, or pure satire. It takes knowing his music well to know when he's being himself and when he isn't, and that's really why his cult following seems to be the only people who really like him - and why 'Short People' was so misunderstood. It made me think of masks and characters, and there's perhaps no one in music history who more wholly dedicated themselves to a mask than Frank Sidebottom.
I did a bit of a disservice to Chris Sievey and the Freshies by framing them as a failed indie band, they were actually quite well loved and did (and still do) have an unexpectedly large following in Japan. But the timing of 'I'm in Love With a Girl...' failing to register on the charts due to a postal strike is too close to the ending of the band and the beginning of Frank, and I thought it had to be framed that way to get to the ~essence of Frank~

I only found this recording in the week of release so it sadly didn't make the episode, but it's maybe the most enlightening piece of Frank and Chris' story I've seen. Below is the YouTube upload of the staged interview between Frank Sidebottom (as a reporter) and Chris Sievey that came included with Chris' self-made videogame The Biz.


I don't think the episode really quite nailed this, but the fact that Chris Sievey made a videogame about the music industry, and included a release that was not only a vessel for him giving his opinions on the music industry, but used it to promote songs by his band The Freshies while also debuting the character that would take up all his future creative efforts in Frank is certainly somethin.

Frank is such an erratic character that there are reams of (mis)information missed in this episode. So much of that intense DIY approach deserves more light, but I thought the biography style telling of Randy's story would get a bit dry if I repeated it, so this misses a lot of the progression of the Frank Sidebottom discography (and all the cut-and-paste tape stuff). I think a lot more time could have been put into talking about his TV show (Frank's Fantastic Shed Show) and all the surprisingly big name guests who came through in his later years as an illumination of his pop culture interactions too.


Conspiracy Threads
I didn't have a whole lot that connected these two to the others in the series, but I do think there are more accidental parallels. The song-writing approach of the Country Teasers (Ep 10) and Randy Newman does have a lot in common and the Teasers did cover 'Short People,' but there's no clear connection there. Likewise, there's a lot in common between post-1978 London post-punk communities and Chris Sievey's approach to cut-and-paste self-releases and his tendency to connect all his activities outside of the world of the music industry (though he tried very hard to crack that world and was forced to do it on his own), but there's not much that intimately ties them together. (Other than Frank's 'Indie Medley' which features atrocious covers of The Fall and Camper Van Beethoven).

Credits: Production and Guest Reads
Barely Human is produced by Jason L'Ecuyer and Output Media. Sydney band Tim & The Boys created the show theme, Jules Nominal covered the Randy Newman songs used as backing music, and Yuli & Jacc Gears re-produced 'Guess Who's Been on Match of the Day' by Frank Sidebottom. I'd also very much like to thank Kate Montague, Jess Hamilton and Adam Connelly of Audiocraft who Produced a previous version of this episode as a Pilot in 2018. The cast of this episode who played various characters in guest read form are below!