Ep 3. Running Out of Gags; I Like The Shaggs (...and Roky Erickson) 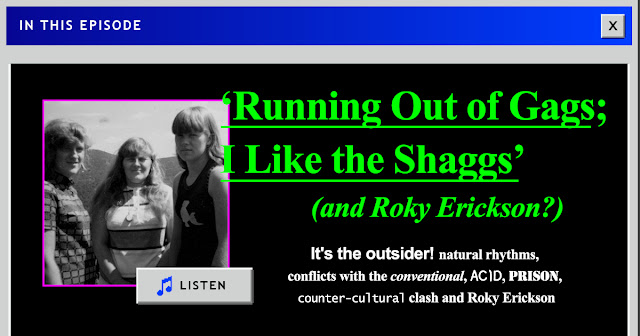 Episode 3 of Barely Human continues from the self-sabotaging satirists of Randy Newman and Frank Sidebottom to some artists often placed outside of conventional music narratives. It's an episode about the notion of the outsider, with The Shaggs, a band of three sisters from New Hampshire who discovered their own entirely unique sounds in their family home in the mid-60s...and Roky Erickson, the front-person of Texan proto-hippies the 13th Floor Elevators, who came back from a prison sentence for marijuana possession to create a largely over-looked body of solo music. You can listen to Ep 3, Running Out of Gags; I Like the Shaggs (...and Roky Erickson) at the links below.

Now, some show notes, featuring, sources, further reading, playlists and more discussion of The Shaggs and Roky Erickson that didn't make it to audio. First, here's a Spotify Playlist to follow the episode with...unfortunately, the best of both The Shaggs and Roky's discography on that platform, so this playlist differs by focusing on some artists who sound, feel and interacted with both The Shaggs, Roky, the eeaaarly counter-culture (proto-hippies!) with links to artists deeper in the series. If you'd like to get in touch to chat more or give feedback, follow us via @barelyhumanpod on Twitter, Facebook or Instagram or email me at max@barelyhuman.info.

Some supporting info an omissions below...

Running Out of Gags; I Like the Shaggs
The Shaggs story has been told in a few different formats before, so it was difficult to not just rehash the tale...even more difficult was figuring out a number of contradictions between the various sources. In those cases, I opted to take the word of the Wiggins sisters if it was given in an interview...so for example, while Irwid Chuswid's chapter on the Shaggs states that the band was aware of, fans of, and inspired by '50s pop bands like Herman's Hermits...the fact that the Wiggins say they weren't allowed to (and thus didn't?) listen to pop music in a more recent interview with Jon Ronson got the final word in this episode.


There are some other aspects of the Shaggs section that could have been done in different ways. I opted to focus a lot on their father's controlling influence on the band, but in doing so I think some of The Shaggs' unique ability was lost when discussing their Dad's role in forcing the music to be made. The important thing about the Shaggs is they picked up some instruments (regardless of who handed them over), made something strange, and stuck with it through to the end of their playing days. They didn't adapt to the rules of written music, at least not much...their second album Shaggs Own Thing is maybe a bit more in the realm of convention, but it is very much their own thing.


I was really surprised to find this footage of the Fremont Town Hall dances too! Unfortunately there's no audio (someone has dubbed in tracks from the LP recordings), so we tried to get the feeling of that video into the sections about Fremont in some small way...

Things Will Soon Be Pleasant Son; I Like Roky Erickson
I wanted to focus a lot on Roky as a person in this section, but I think really needed to bring in the 13th Floor Elevators story to set him up properly. It glosses over the Elevators story to get to Roky's own music. Their move to San Francisco and brief time in and around Haight & Ashbury sets them up as more vital counter-cultural players than they're given credit for in this episode, that sold them as Texan outsiders (which is partially true). 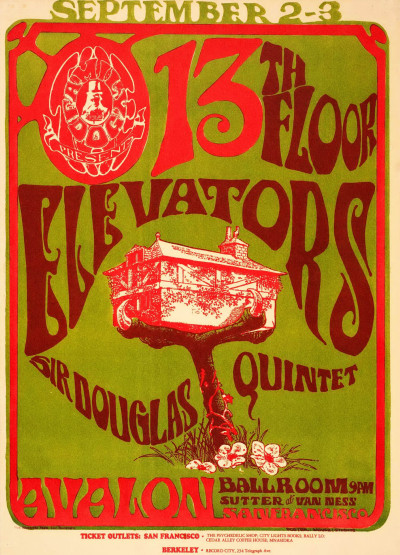 The relationship between Tommy Hall and Roky also could have used more time, Tommy wrote the lyrics for all but two 13th Floor Elevators songs, which is why we moved onto Roky pretty quickly: to let his voice and words interact with the story more closely. There's (very clearly) an entire episode on this relationship and the rise of the 13th Floor Elevators alone...and I like the Dick Clark Bandstand intro (above, mentioned in episode) as an illumination of that.


Conspiracy ThreadsThere was very brief mention of the successful members of the '80s punk and hardcore underground turning back to release some lost Roky material, but I was surprised to find this photo of Roky with Henry Rollins and King Coffey (Butthole Surfers) the day I wrote this blog post (meant to be.) There were some allusions to Roky's lasting influence among the latter-day underground artists this series touches on, but I don't think I really nailed home the point in this episode or elsewhere in the series. A stated influence on the Butthole Surfers (obviously - more on them in Ep 8) and even Cheater Slicks (Ep 9).


I'm not sure if it would count as a connecting conspiracy thread, but there's a lot of common sounds between The Shaggs and the London post-punk movement that gets profiled in Ep 7. The studio that The Shaggs recorded in in 1968, Fleetwood Records was also an unexpected hotbed of underwhelming rock n roll bands who informed much of the '90s garage rock revival that we'll cover in Ep 9. Maybe more on that in the blog later....

Sources & Further Reading
This episode was much easier to research than many others thanks to a few resources written about worlds at least adjacent to the artists. Irwin Chusid's chapter on the Shaggs in his book (which is a great read!) and many agreements and disagreements about what he calls a "universe of outside music" informed much of the direction of the episode, while Jon Ronson's interview with the band helped plug a few holes in the story I was looking for. The Lost Notes podcast episode on The Shaggs is wonderful...I listened to it a few times on its release and when I realised I wanted to write about them I haven't gone back hoping it didn't inform our version...but I'm sure there's overlap in all of these sources. Paul Drummond's book on the 13th Floor Elevators was a great look at Austin, Texas in the proto-hippy days and I'm really thankful for a lot of the details therein. The Roky section was light on though, so it was nice to be able to expand upon a lot of the writings in this episode.