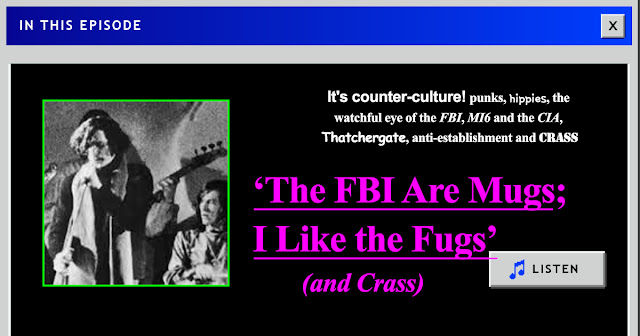 The first episode of Barely Human is now live, and links two bands who fell under the watchful eye of the establishment: '60s counter-cultural innovators The Fugs, and '70s anarcho-punk pioneers Crass. Listen to the stories of these punks and hippies and how they crossed paths with the FBI, the CIA, MI6, J. Edgar Hoover, Ronald Reagan, Margaret Thatcher and more through the links below, or "wherever you get your podcasts."


Welcome to the show notes, featuring, sources, further reading, playlists and more discussion of the bands of the episodes below. First, here's a Spotify Playlist of a number of Fugs, Crass and related songs that made up their versions of anarcho counter-culture. Maybe a fun listen for the newcomer, but if you're a fan of either band and this doesn't do them justice, please direct your hate mail to @barelyhumanpod on Twitter, Facebook or Instagram or email me at max@barelyhuman.info.

In the process of researching and writing these stories, getting them down to length, and linking them up neatly via a common theme, a lot of stuff inevitably gets missed. I've done my best to get to the root of what made the Fugs and Crass not just special, but closely related in my mind, but here's some other details that were missing.

The FBI Are Mugs; I Like The Fugs
The Fugs were maybe more influential than the episode gave them credit for. They're certainly forgotten by the main historical narrative of the time, but in 1967, Ed Sanders made the cover of LIFE Magazine as the face of the counter-culture. That cover, the idea of "the worldwide underground" and "the other culture" will come up constantly throughout the next eleven episodes, so in hindsight this could've used a lot more air time, but if you've made it here consider than unpaid exclusive content. 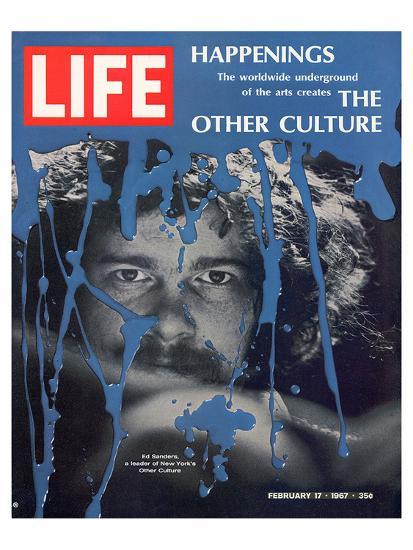 Brief mention was made of the 'Flower Power' image taken from the 1967 protest that featured The Fugs attempting to exorcise the demons from the Pentagon, and here's the Pulitzer nominated photograph Bernie Boston took from the demonstrations for reference. A beautiful photo taken very seriously by the art critics and journalists of the time...in stark opposition to how The Fugs exorcism of the Pentagon occurring in the background of this image seems to be taken.

Kicked out of Mass; I Like Crass
Yet to see how the anarcho-punk contingent responds to telling the Crass story as a continuation of the hippy counter-culture, but hope that it's a unifying experience? There's a lot missing from the Crass story, especially in terms of the impressive catalogue of music they put together in just six years of playing. That omission is largely because I wanted to focus on the Thatchergate, Criminal Blasphemy trial, and Romance Magazine stories that really nail home the idea of Crass as anti-establishment agitators. Here's a brief internal memo from within Thatcher's government that discussed the actions of Crass. A transcript of the Thatchergate tape can be read here and is either an exhilarating or extremely dull experience depending on your ~love of the archive,~ below is one of the FOI doc's which I've misplaced but will upload asap!
Lots more about Crass should have been mentioned if not for lack of space. They essentially spear-headed the all-black military-esque regalia of the crust punk, which is one of the most lasting influences (for better or worse) 40+ years on from their first shows. Maybe Crass were also the innovators of the punk banner? No time to fact check that but haven't come across anything that pre-dates this persisting trend (played a show in Sydney with BB & The Blips in 2018 that looked exactly like this photo below).

Conspiracy Threads
On many occasions developing and writing this series I got completely derailed by loose threads and coincidences (I reckon that delayed the series launch by at least a month when drawing line maps on A0 cardboard to figure it all out). Most of the time I managed to keep these out of the episodes (nothing ruins the flow of an audio work like "...and another thing." I don't remember too many in this episode but I'll drop a conspiracy section at the end of the show note and maybe that'll come to something by season's end.

Big omission in the episode, but The Fugs re-formed in 1984, the same year Crass disbanded. They went on to play for significantly longer than they did in their first iteration. In the '90s, they heard word of the official Woodstock Festival 25th anniversary that was an essentially an exercise at tying the major label 'alt-rock' craze to '60s counterculture for profit. The Fugs staged an alternate anniversary, closer to the actual location the original festival was located, and featured something they considered more in line with the history they helped create than Nine Inch Nails, The Rollins Band and Metallica.

For a time, The Fugs new line-up featured infamous Shockabilly member Kramer, who was also one-time bassist of Butthole Surfers (who appear in Episode 8). The Butthole Surfers in my mind have more in common with The Fugs than anyone else in musical history, and I couldn't find a way to draw a connection between Ed Sanders intro to this episode and Gibby Haynes' numerous nonsensical acid babble monologues the Blind Eye Sees All live video - but it's a thing.

As for Crass, I reckon their 1978 song 'Punk Is Dead' is maybe as good a marker as any for the end of punk proper and the beginning of the British post-punk regime. I'll get to this later in the series with the post-punk episode in Episode 7 (feat. Television Personalities and The Raincoats), but let's just tease it here...Crass feel like a very instrumental marker along the road to nowhere of Barely Human in a way that I don't think I ever touched on in the series to be honest.

Credits: Production, Guest Contributions, and More!
Barely Human has been a long time in development so there are many, many people to thank, I'll go through episode-by-episode to the people who've contributed to what gets published. The show was produced by Jason L'Ecuyer and Output Media who advised on scripts, discussions, and brought the audio side of this together with what I think is a really bizarro experimental way. Sydney band Tim & The Boys created the show theme, which was an out-take from their incredible first LP, Growing. Yuli & Jacc Gears of Sydney band Negative Gears re-produced looping covers of 'Couldn't Get High' by the Fugs and 'Punk is Dead' by Crass. Meanwhile... the cast of this episode who played various characters in guest read form are below! Please get in touch if you'd like to talk to any of these people about doing more of this for your show or podcast, I rate and vouch for them all very, very enthusiastically.

Sources & Further Reading
There are a lot more references that I've lost along the way (this ep was first drafted in March 2019!), but I'll update this short list as I come across them.