The Barely Human Project: A zine and cassette bootleg subscription service for 2021 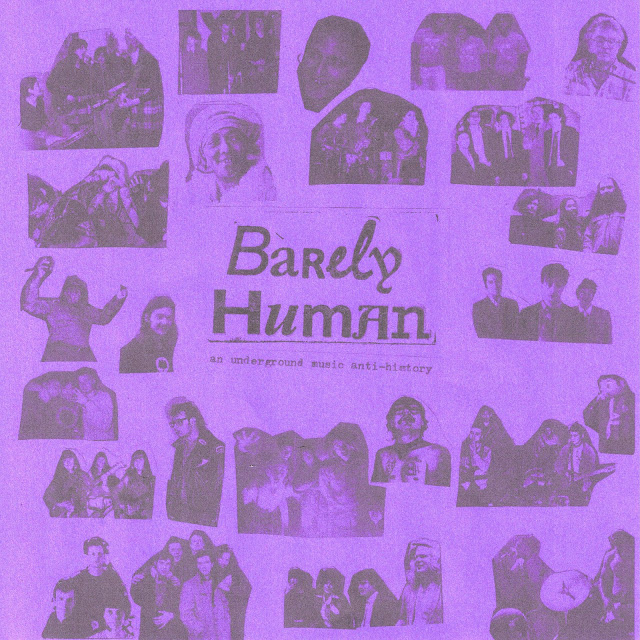 To raise funds for the research, writing and production of Barely Human Season 2, the pod has become an ongoing project, retooling as an interim zine and cassette subscription service throughout 2021 featuring material from the next series... More info below, or jump in now at www.patreon.com/barely human
~~~
The BARELY HUMAN project is a series of ongoing works charting an underground music anti-history of the misunderstood, footnoted, glossed over and forgotten artists of the past and present. It has appeared in zine format, and most recently as a podcast that ran through the opening months of 2020, charting a long social history of underground music – from the countercultural promise of the hippies and the punks, to the subcultural practice of post-punk and hardcore. You can listen to Barely Human via the links at www.barelyhuman.info
This patreon is designed with the goal of making the second season of Barely Human, which is ready to step into the writing and researching phase, but requires a production budget to go ahead as a full quality, bells and whistles, experimental podcast. As such, we're honouring the project's roots as a zine series by expanding this exploration of underground music anti-histories via the production of new zines, bootleg cassette tapes, a potential expanded book version of the series, and (when enough money is raised) the production of Season 2.By subscribing to this patreon, you're directly funding the process toward a second podcast season, and have the option through the various tiers to sign up to the BARELY HUMAN subscription service for a list of zines and tapes outlined below. The money raised will go towards filling a production budget to pay the people involved in making the audio stick. Here's what to expect as a patreon in 2021!Subscription Items - Cassettes, Zines, ObjectsThese will post out throughout the year to your elected address at a time when your total subscription fees meet the cost of production and postage. Note that being Australian-based, this will change depending on where you're located (you can also contact max@barelyhuman.info to arrange postage separate to the patreon fee). Here's what's coming!

1. Barely Human: Reprise Zine (+ bootleg mixtape; shipping April/May 2021).A collection of the pages and pages of unused notes and scripts discarded from the first season of Barely Human, reassembled as a revisiting of the show's running theme. Includes discarded narrative threads, elaborations on some of the thornier aspects of the series, a discussion of the various connections between the bands in the series, and short-form essays on many of the artists in and out of season one of Barely Human. Accompanied by a recycled C90 cassette tape full of a bootlegged mix tape of rarities by the bands in the series.2. That's Enough Punky; I Like Folk 'n' Country (+ bootleg mixtape; shipping June/July 2021). A loosely researched country music zine written mostly in the wake of the first season of Barely Human. Spinning off the rising phenomenon of the ageing out punk's discovery of country music, it explores the parallels between punk and country culture, the problems of the myths and untruths of country music history, and discusses the genre and its offshoots. Discussions range from the problems of mainstream country music documentaries to the role of the country music radio station of Grand Theft Auto: San Andreas. Accompanied by a recycled C90 cassette tape filled with a playlist of country music anti-hits discussed in the zine.

3. Dispatches from the Barely Human Project (Shipping throughout the year). This is the motivator that keeps the research for Season 2 running. As each band and community gets added to the series, the basic research notes will be expanded and included as a mini-zine to go with a bootlegged tape of the band's best records. Most of the material will be unique to the zine, and will not be announced elsewhere until it makes it into the podcast season itself. 4. BARELY HUMAN SEASON 2 (TBA, first episodes expected end of 2021 or early 2022).As mentioned! Season 2 will be going ahead if the production budget can be raised through patreon subscription and external sponsorship (also available as a patreon tier). This will be made available in cassette format to patreons first in two episode lots before being uploaded to the podcast apps.