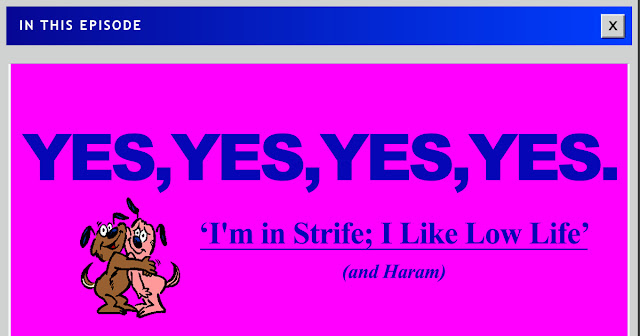 The final episode of Barely Human comes into the present day to look at two contemporary punk bands who caught the eye of the broader culture. In Low Life, we find a satirical punk band from Sydney, Australia who were mistakenly swept up in the #pizzagate scandal, while New York's Haram brings us full circle to Episode 1, with another run in with the misguided gaze of the FBI. Listen now below or in your favoured podcast app.

I'm in Strife; I Like Low Life
Apologies again for the difference in sound quality for this one compared to the rest of the series! All kinda went to shit here in Sydney (as it did everywhere) when the coronavirus pandemic hit, so this was all somewhat scrappier than usual. Hope everyone's keepin' healthy and looking after each other, it's been a time in Sydney and I'm sure it's everywhere else too.

This episode is the fourth that was part-based on a zine, this one was released in 2018 and was designed as the FINAL PART OF THIS ENTIRE PROJECT... but it was only a week after releasing it that I was asked if I wanted to do a podcast, so...here we are.

As I mentioned in the episode, Low Life are probably the band who have most closely dealt with aspects of my upbringing and present. Writing this episode was difficult, there were maybe five different versions of it that tried to justify Low Life's presence in the series...and eventually, after a meltdown and an identity crisis, it was the realisation that the arc of the twelve episodes did kind of end up in my own framing. Hopefully we get a chance to go back for a second season so I can extend on these ideas of contemporary punk and subculture, but I hope this was enjoyable to the listener!

I admittedly probably overstated the impact of that record cover on the #pizzagate storm (it was less than a footnote in the scheme of things), but it really was a bizarre thing to view from a distance. Also found it pretty difficult to really explain why Low Life felt important in their time, particularly when there are so many people in Sydney who have always rolled their eyes at the band: but I also think that kind of cynicism is a contemporary condition. When I got a Low Life tattoo in 2014 it was done in a kind of absurd mania after seeing three Black Flag tattoos on twenty-somethings within a few week period... I'm no anti-band tattoo guy (I've been dumb enough to get tattoos that refer back to Flipper, Butthole Surfers, Randy Newman, The Omegas and Watery Love, so the bars would be the least of my problems), but at the time I was in such disbelief about the constant reaching back to bands passed that I felt this silly need to reach for what felt like the 'now' of 2014. (No one in Hermosa Beach was getting 13th Floor Elevators tattoos I'm sure).

In the original zine I touched a lot more on the idea of the post-political in leading to contemporary punk, but couldn't find the right way to discuss it in the episode proper. I fell into a hole of reading into the post-political a few years back, the idea that after the failure of Occupy, etc in 2011, we entered a space where we kinda gave up on taking sides... though it's hard to find the evidence for it beyond a feeling. Maybe a future episode could follow this, but I think in particular it was some brands of hardcore that pushed in that direction, apolitical 'experiential' hardcore, pysch influence joy rides like Melbourne's Gutter Gods, New York's Dawn of Humans (and Crazy Spirit), Montreal's The Omegas and Sydney's Oily Boys all feel like outcomes of that. But it always felt like I was reaching...

Sound the Alarm; I Like Haram
Haram's story is obviously incredibly unique and strange for the time, and for Barely Human, too important to not put in the same thread that started with the FBI in New York in 1968 with The Fugs. I feel like Haram were blanketed by the bigger names that came before them in a way though, the songs that band put together are bizarre, weird hardcore, strange structural elements, the 'New York sound' sure, but in hindsight there's a lot more going on than Haram ever got given credit for...and a lot of that is Nader's vocal. I'm no theorist when it comes to music, but there's definitely a way that he bends the Arabic language that just isn't there in other hardcore bands of New York. I was really lucky to see Haram in Montreal when I was living there, and again in NYC when I visited (supporting Mommy who I think are my fave of the NY hc intelligentsia), because both times they played in Sydney in 2019 I was playing a show at another venue which was a drag.

The Haram section was tough to write, as a spectator of Arabic and Lebanese culture and with a the importance of the 'stay in your lane' approach to writing, it felt like a mistake to dive into the background of Haram. It may well have been, but I also (as with many other times during the series) didn't want to defer to talking about a band with a white/colonial/Western background for ease of referencing. I don't know if I got this right or not, but please mail criticism or thoughts to max@barelyhuman.info for future series (if they happen).


Haram also highlight another aspect of contemporary sub(not)culture that I wanted to discuss but felt like it needed an entire episode to dive into. Much more than in the past, current day punk and hardcore is very focused on identity, reclamation and visibility of women, trans/nb people, people of colour...people who have migrated or descended from migrants are drawn to singing in their mother tongue, or at least forefronting their pasts rather than fall into what the early punk movement demanded of its members: to identify as 'punk' in adopting the moniker as a sign of equality (erasing systematic histories of race, gender, sexuality for the sake of convenience as much as solidarity). White Riot: Punk Rock and the Politics of Race is a great read that pulls together various essays, articles and interviews that explore those notions if you haven't yet tracked down a copy.

Downer Ending
So that's Barely Human! The end! We only ever planned twelve episodes, so I've no idea if a second season is going to or is likely to happen but I suppose the chances of that would be increased if you shared the show around and tried to bump up the listens? I'll probably take a breather for a little while then get back to pitching a second season to some organisations to try and get some dosh to fund a second (this series took a little over a year to create, plan, design, research, write, edit, produce and release so hopefully future ones are a little simpler). I feel like I did my best to tie up a series arc and kinda get the messages across that I wanted to explore with in the event that a Series 2 didn't happen...but it still feels unfinished to me. There's obviously more to explore...threads that were missed, and an entire world of contemporary punk and hardcore that's only hinted at... hopefully can come back for more, but until then, thank you for comin along on the ride, and email me any time if you wanna chat more about it via max@barelyhuman.info


Sources & Further Reading
Some sources, interviews! For Haram section in particular I leaned heavily on Nader's response to interview questions to avoid telling the story for him (the approach of the show was to treat every band via reference to the archive, rather than reaching out for primary interviews... a decision I made early, so that now-dead members of the bands featured have the same say as those living). Here's where I got much of that from...I've likely left some out so will update as soon as I find and remember them!